daniele uploaded an image.
All contributions

A fascinating tour through two Austrian provinces and three Italian regions, accompanied by the imposing mountains of the Carnic Alps and the Dolomites.
229.2 km
5:30 h
5018 m
5019 m

The start of this wonderful tour is in Kötschach-Mauthen, the "most delicious corner of Carinthia" in the western Gail Valley (Gailtal). True pleasure specialists are at work in this world-wide first "slow food travel region": such as Herwig Ertl in his "Edelgreißlerei" or award-winning chef Sissi Sonnleitner in her restaurant "Kellerwand". In the small beer manufactory "Loncium" artisanal beer is brewed and in the roasting plant "San Giusto" roasted coffee is produced. And with much love the farmers produce the coveted Gailtaler bacon and cheese.

Through the valley of the thousand mills

A winding road leads to the Lesachtal, a remote high valley at about 1,000 meters above sea level in the southwestern corner of Carinthia, which is also called the "Valley of the thousand mills". Tourists are welcome and will be spoiled culinarily with a "Morende". The word comes from near Italy and means something like a regional snack: homemade bacon and sausages, cheese and spreads on the wooden plate, this is Lesachtaler bread, from UNESCO's Intangible Cultural Heritage. Delicious also the "Schlipfkrapfen", pasta dough which is filled with potatoes, and the sweet "Plattln" from yeast dough. The people are religious and in the capital Maria Luggau is the famous basilica, which is a popular destination for pilgrims. Every year in September more than 500 people take part in the "Kirchfort in de Lukkaue", which goes from Sappada in Italy over the mountains to Maria Luggau. We are already in East Tyrol and cruising on the Carnic Dolomites Road comfortably over Obertilliach to Sillian. After a few kilometers you are in the South Tyrolean Val Pusteria and reach San Candido in Toblacher field. Here rises the Drava, the main river of Carinthia.

In Dobbiaco we turn south and drive through the sparsely populated Höhlensteintal (Val di Landro) along the Rienz river to Schluderbach. Continue to Lake Misurina, surrounded by a breathtaking mountain panorama: the Drei Zinnen, Monte Piana, the Cadini group, Monte Cristallo and further south of Marmarole and Sorapiss. If you feel like it, just before the lake swings onto the toll road to the Drei Zinnen. The ride on the toll road (7 km) through the nature park costs around 15 euros for motorcycles. But that definitely pays off, because you get to the foot of this mountain massif, which is really impressive. Back in Misurina you continue to Auronzo di Cadore.

Through the Piave Valley in the region of Veneto we continue to Sappada, a pretty little village that was settled in the eleventh century from East Tyrol and in which one still speaks "Plodarisch", a Bavarian-Tyrolean dialect. The kitchen has its roots in the past and much in common with the one in Carinthia. Like the "Gepitschta Kropfn" from pasta dough with a filling of curd cheese and wild mint, which resembles the Carinthian "Kasnudl". Or the sweet "Hosenearlan" (bunny ears) and "Mogn Kropfn" (poppy seed donuts), which are typical for the carnival season. Incidentally, the "Plodar Vosenocht", the carnival in Sappada, is one of the ancient customs in the valley, which today are cultivated more than ever. The houses and courtyards in the valley are also beautiful and well-kept - from Sappada Vecchia to Cima Sappada - which are built almost entirely of wood.

Of watches and eyewitnesses

Via Forni Avoltri you will reach the green Pesarina valley, which is already in the Friuli Venezia Giulia region. One should make a detour to Pesariis near Prato Carnico. It is the "watchmaker's village" with its own watch trail and watch museum. Via Ravascletto you reach Paluzza and turn north to Timau, another German language island in Italy. Via the Plöckenpass, the Monte Croce Carnico, we return to Carinthia. The border area was in the First World War scene of bloody skirmishes. The bunkers, tunnels and paths, which were built into the mountains, can be visited in the open-air museum. On the Italian side of the pass some unlighted tunnels provide thrills, the Carinthian side is then quite well developed and so you can get over some nice curves with tilt back to the starting point Kötschach-Mauthen.

all notes on protected areas
Arrival by train, car, foot or bike

Help others by being the first to add a review. 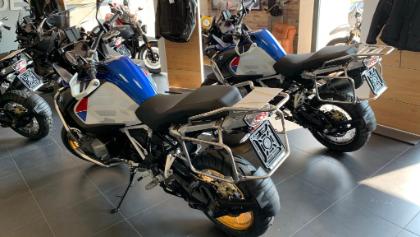