Very nice tour, but the problem for me is that I could not ...

Denis Cubrakovic
11.08.2017 · Community
Very nice tour, but the problem for me is that I could not do it in one day. I have started from Sulzenauhütte Parking at 6:00 in the morning, and I was on the summit of Wilder Freiger at 14:00, which is 8 Hours. And I was pretty exausted. And Author has managed also to go up and down in 8 hours. Bravo! I doubt that I could go down at all the same day, so I spend the night in Becherhaus. It took me about 1.5 hour to get there from Wilder Freiger summit, because I was very tired. I am 52 years old and not very fit. I have climbed alone, and Glacier was not problem at all. Crevasses are very rare and small, easy to be seen, there was no snow at all. The glacier is flat and it was the easiest part of the day. Only thing that I needed was of course crampons (steigeisen). Then the ridge went very slowly, but it is not too difficult. Way down to to the Becherhaus also goes over the ridge, on the exposed places it is secured. Next day it took me 6.5 hours from Becherhaus to the Sulzenaualm, there was a lot of rain. It was not easy to find a path always, there was also some fog. Sometimes I was loosing red-white markers and it took me some time to get back on the path. Also the path from Seescharte described here is not marked any more, they changed it, and there is a bih S.H-> on one rock, you should follow it instead of here proposed way. I was wet and I did not stop in Sulzenauhütte, but continued downhill. In Sulzenaualm I was told that the river is over-flooded and it took the bridge away and that we are trapped there, no way we can go down to the parking. They said the only chance is that we tomorrow go to the Sulzenauhütte, then to Dresdnerhütte and then with cable car down to valley. That was not good option for me and also for group of 5 other climbers. Among them was a Mountain guide guy, and he agreed to took our group over the ridge on the north-west of the Sulzenaualm. It is steep and there is no path, very rough and wild greenery. It was difficult to find the places where we can pass. It took us about 3 hours to get to the parking place from Sulzenaualm. But we were free and we could finally relax. Thank you Stefan!
mehr zeigen Weniger anzeigen
Sulzenauhütte (arrow). Bridge on the picture was later torn down by high water
Foto: Denis Cubrakovic, Community
Sulzenauhütte, behind Aperer Freiger
Foto: Denis Cubrakovic, Community
Zückerhütl
Foto: Denis Cubrakovic, Community
One of the biggest crevasses.
Foto: Denis Cubrakovic, Community
My way over Fernerstube
Foto: Denis Cubrakovic, Community
Wilder Freiger summit
Foto: Denis Cubrakovic, Community
Kommentieren 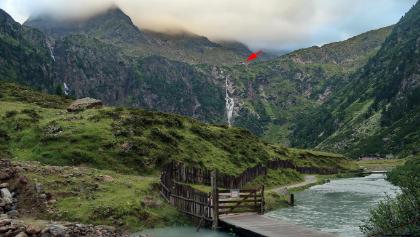 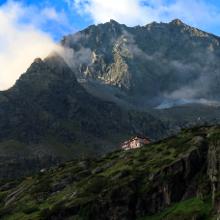 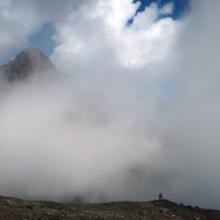 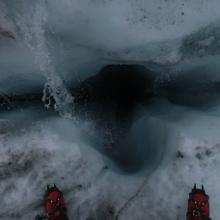