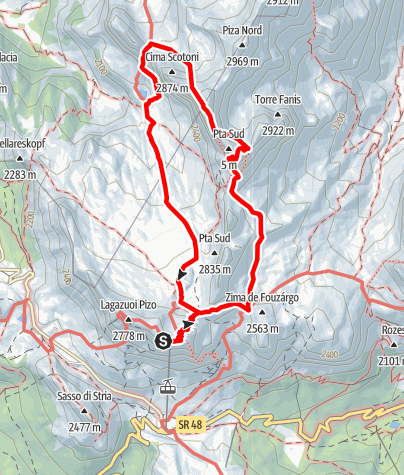 Keep your headlamps handy for the long war tunnels on Via Ferrata Luigi Veronesi.

This tour should only be undertaken with experience and knowledge of via ferrata safety.

Take trail 401 from the hut to Forcella Travenanzes (there is an earlier turnoff to Via Ferrata Tomaselli, but if you plan on doing both ferratas, the route described here creates a loop). Turn left here to ascend to the north on trail 1020 toward Forcella Gasser Depot (war ruins) and Forcella Granda. From here, follow the flat area with building ruins and then the tracks to the entrance to the Tomaselli Via Ferrata (you can see the old ladders). Follow the via ferrata to the summit of the southern Fanesspitze at 2,980 m. Cross over the summit and descend the other side to Forcella dei Quaire (also via ferrata).

From here, it is possible to turn right and return to the hut. Or, if you still have energy to spare and can do another 2 1/2 hours of via ferrata PLUS another 5 km. of hiking with 1,000 m. of elevation gain, continue to the left onto the Veronesi Via Ferrata.

For the Veronesi Via ferrata, descend to the north (left) from Forcella dei Quaire through steep scree and keep left at the rock. You'll traverse a rock band, shortly interupted by a dark tunnel, to a saddle that sits below Cima Scotoni. From here, descend the trail to Forcella d. Lech (also called Forcella del Lago). At Forcella d. Lech, turn left for the steep scree descent from the saddle. The descent is short-lived and followed by a long and sustained climb to the south to Forcella Lagazuoi, and finally back to the hut.

Note: the Veronesi Via Ferrata, although technically easier, requires route finding and navigation through difficult terrain (steep and loose scree).