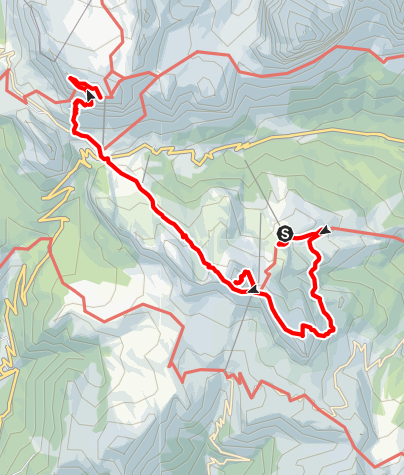 mittel
Strecke 12,9 km
Dauer7:28 h
Aufstieg1.388 hm
Abstieg962 hm
Höchster Punkt2.761 hm
Tiefster Punkt2.099 hm
This is a great warm-up day, with relatively easy via ferratas. While the distance may seem long, it is possible use lifts and a bus to shorten it significantly. This day covers the Ra Gusela Via Ferrata (A), the Averau Via Ferrata (B) and the Lagazuoi Via Ferrata, also known as Sentiero dei Kaiserjäger (A).

This tour should only be undertaken with experience and knowledge of via ferrata safety.

The tour starts from Rifugio Scoiattoli, which is reached by gondola from the Cinque Torri Bus Stop. The bus stop is accessible from Cortina d'Ampezzo. Timetables are available at https://dolomitibus.it/; however, they are first updated for the summer season during the second week of June.

There is a cable car from the Cinque Torri Bus Stop to Rifguio Scoiattoli. If you wish to skip the cable car, it is a 4 km. hike with 365 m. of elevation gain.

It is possible to minimize the walking between the Averau Via Ferrata and the Lagazuoi Via Ferrata by descending to Rifugio Scoiattoli and taking the lift to descend. Take the bus (depending on the timetable) to Passo Falzarego and resume the hike from there.

It is also possible to ascend to Rifugio Lagazuoi via cable car as long as you arrive while they are still operating (5:00 pm).

You can check operating times for the lifts here: https://www.dolomitisuperski.com/en/SuperSummer/Discover/Valleys/Cortina-d-Ampezzo/Lifts

Enjoy the views and maybe a snack at Rifugio Nuvolau before descending on trail 439 to Rifugio Averau. Continue to the north, passing the top of the ski lift that is not operating, skirting around Mount Averau and finally ascending until arriving at the entrance to the via ferrata. Take the Averau Via Ferrata to the summit of Mount Averau. There is one spot where the via ferrata branches into two...the left branch is rated B and the right branch is rated A/B. After reaching the top of the cables, it is a 20 minute walk to the summit. Return to Rifugio Averau via the same route.

From Rifugio Averau, ascend to Forcella Averau to the north west and continue following trail 419 as it descends to Falzarego Pass.

If there is still time and energy to spare, we recommend ascending to Rifugio Lagazoui via the Kaiserjägersteig. This takes two hours. If it is late in the day or if anybody is tired, it is possible to simply ascend to Rifugio Lagazuoi by cable car.

To continue up the Kaiserjägersteig, cross the road at Falzarego Pass, walk past the lift station. Just after the wooden building, continue following the trail uphill. Take this trail to theturn-off for the Lagazuoi Via Ferrata (labeled as Kaiserjägersteig), which is well-marked. The good trail ascends several hundred meters before arriving at the start to the via ferrata. Follow the via ferrata, which has quite a bit of walking between the cabled sections, to Lagazuoi Piccolo at 2,778 m. From here it is a 20 minute walk on an accessible trail to Rifugio Lagazuoi.

Tip:  At the area where the old war tunnel is, follow tracks up until locating the trail again above the tunnel.

The Cinque Torri Bus Stop is reachable by bus from Cortina d'Ampezzo. Summer timetables are available at https://dolomitibus.it/, but are not updated until the second week of June.