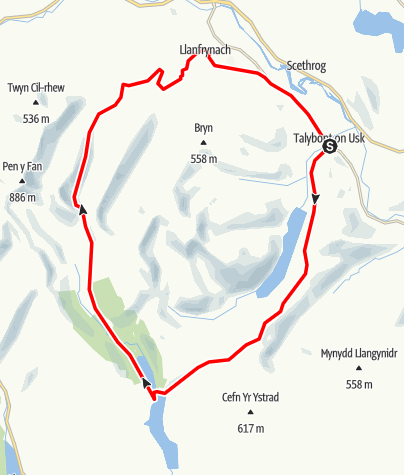 There’s something magical about climbing up into high mountains, and they don’t get much higher this far south. Pen y Fan — at 886m, the highest point in southern Britain — is just a stone’s throw away from the trail as it slips through the notorious ‘Gap’ between Cribyn and Fan y Big.

To get this high means a fair amount of climbing, so this is a relatively short Killer, but don’t let that put you off — it still offers around 1,000m of ascent and descent, with a few nice techie sections to keep you amused too.

The opening climb is the biggest, with over 400m of stiff hillside separating the narrow, pub-lined main street of Talybont-on-Usk and the rutted, open moorland section of the tramroad, which straddles the hillsides of Bryn Cefnog at over 500m above sea level. But, over half of this is lost in the descent to Pontsticill, which includes some steep and stony challenges along the way.

The Gap is rightly considered a classic. It climbs high into the Brecon Beacons on great tracks amid awesome scenery. The standard version is a half-day ride but this is a longer version, with more climbing and downhills.

From Talybont-on-Usk (Landranger 161/SO115225), take the Taff Trail SW into the forest, leaving it quite soon to climb due S (signed Brin Ore), all the way up onto the ridge at SO102176. Now follow the main track SW up through a spectacular saddle.

Immediately after this, break WSW onto a boggy track that becomes rocky and drops to the Pentywn Reservoir. Climb NW on the road, then N onto a track at SO035173. Take this to the Gap and down to farm buildings at Bailea Farm. Take lanes E to the BW at SO059245, and take this to Llanfrynach. Follow the canal home.