Alex Feinberg
30.08.2018 · Community
Greetings! This was my first via ferrata and I really enjoyed it, although as a long-time rock climber who embraces a clean climbing ethic, the idea of so much fixed gear took a little getting used to. This route has (at least) 4 versions on outdooractive: https://www.outdooractive.com/en/via-ferrata/bernese-oberland/klettersteig-eiger-rotstock/111893162/ https://www.outdooractive.com/en/via-ferrata/bernese-oberland/rotstock-klettersteig/5895637/ https://www.outdooractive.com/en/via-ferrata/bernese-oberland/klettersteig-rotstock/31258670/ https://www.outdooractive.com/en/via-ferrata/bernese-oberland/rotstock-klettersteig-grindelwald/11046687/ I am posting my comments on all four versions. They are fairly consistent and there are no major conflicts worth mentioning except one suggests starting the approach from the Kleine Scheidegg station, which doesn't make sense unless you're interested in a longer approach. The perferred start is the Eigergletscher station. The Eigergletscher station is currently a construction site, so the normal approach route has been slightly rerouted, but the start is very easy to find. The approach follows the Eiger Trail (not the Eiger Walk) until you reach a high point on the trail where you find a very obvious sign showing the classic Eigher North Face routes. Turn right at that point and follow a trail directly to the wall, just left of the obvious gully. I could just barely see the ladders from the turn. The route starts with a series of fixed ladders and then gets a bit more varied. There are a few places where you are untethered, but these places are quite safe, so no worries. There are no real physical challenges on the ascent. If you can climb ladders, you should have no problems. There is some exposure which, as an experienced rock climber, was never an issue for me, but if you have a paralyzing fear of heights, why in the world would you be reading this in the first place? The summit is spectacular. The descent is just walking down a gravel field back to the station. There were lots of fixed ropes to aid in the steeper parts, but most are not needed in fair weather. Since I was alone, I was moving swiftly. The approach took 40 minutes. The climb took 50 minutes. The descent took 45 minutes. I passed one party of 3 on the ascent and two more parties on the descent. I always inspect all fixed gear when I climb, and I did not observe any issues with the gear on this route. Overall it was a wonderful experience on a beautiful day in the Swiss Alps, and I look forward to my next via ferrata (a more challenging one).
mehr zeigen Weniger anzeigen
Gemacht am 28.08.2018
Eiger Rotstock approach and start
Foto: Alex Feinberg, Community
Kommentieren 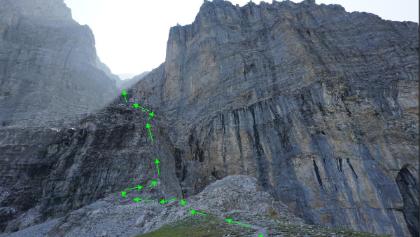