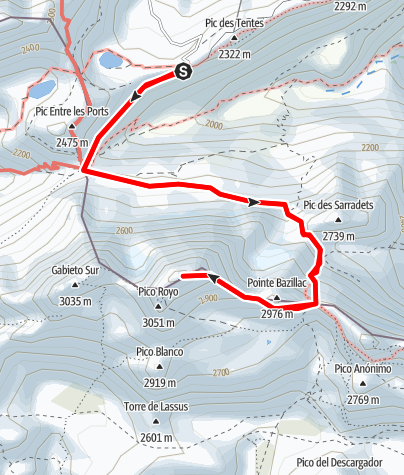 A 3000 Pyrenees, pretty easy, hence its great success in the summer. Some will stop at the Refuge Sarradets, where the grandiose spectacle of breach of Roland alone is worth the trip.

Hiking without much difficulty in the absence of snow but which requires some attention and good shoes.

0:30 Port de Boucharo (2270m)
Continue east on a well-marked path with cairn which rises under the Pïc des Gabiétous and the north face of Taillon. We eventually reach the waterfall of Taillon.

2:00 Col des Sarradets (2589m)
On our right, to the West, is a beautiful view of the Taillon glacier. To the Southeast is the refuge des Sarradets, dominated by the imposing Brèche. A small path slightly downhill leads us easily to the refuge.

2:10 Refuge des Sarradets ou de la Brèche (2587m)
The path continues south, rising on glacial moraine. Above, we reach a shelf where there is often still snow and ice and yoy may need crampons. A final steep path, which sometimes requires the use of hands, and we reached the Brèche de Roland.

2:50 Brèche de Roland (2807m).
The trail continues on the Spanish side to the west, towards the false breach and the Doigt de Dieu (Finger of God).

3:20 Doigt de Dieu (2930m)
Bypass it on the north (French) side. Remain vigilant because snow persists up here and sometimes you have to use your hands.
Now you are facing the goal, head to Taillon by following a well-marked path, which is long if not too difficult.

4:00 Taillon (3144m)
Magnificent views of the French and Spanish Pyrenees